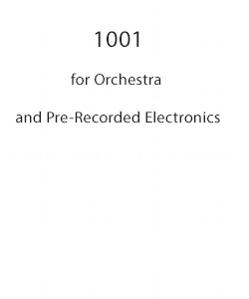 Fascinated by the story, Leanna wondered what Scheherazade’s life was like—her existence dependent on the quality of her narratives. Finishing one story only to start the next in a seamless flow to prolong her life. Scheherazade lived in fear of the man she share a bed with. It’s a story especially resonant in today’s climate, and one of the reasons Leanna felt compelled to write it.

To illustrate Scheherazade's experience, Leanna uses electronics to explore the heroine’s vacillating emotions. The piece asks us to consider what stories Scheherazade told herself in order to survive? And what stories do we tell ourselves in our own moments of uncertainty?

As is typical of her current work, Leanna creates the overarching musical structure using the concept of the Golden Ratio (f). Using this idea of ‘divine proportion’ — found in patterns of nature — Leanna balances the sections and climax of the work according to time itself, rather than on the number of notes or measures. Much like Scheherezade’s existence, measured in days and hours.

The work's title itself 1001 is a palindrome (the same forward and backward). Leanna uses this idea as a way to experience time within the Golden Ratio structure: the piece is a musical palindrome. After the climax at the Golden Ratio, Leanna "recapitulates” the opening in reverse and in a compressed retelling. In this way, Leanna offers listeners the experience of the music as a transformed echo, as the music curves back on itself, folded between memory and insight.