Neither Man Nor Money Validate My Worth
League of American Orchestras with the generous support of the Virginia B. Toulmin Foundation 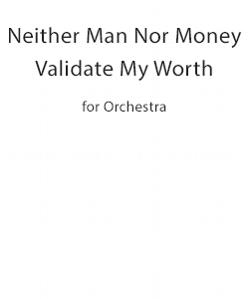 Through Neither Man Nor Money Validate My Worth, I musically explore the life of a child victim of human trafficking. It is intended to be a musical commentary based on Mussorgsky’s Pictures at an Exhibition programmed concurrently. The motivic material of the work is based on the harmonic and motivic elements from the Mussorgsky original. The imagery inspiration for the work is taken from the portraiture of The New Abolitionists– people who are working to end modern slavery and human trafficking.

I first heard the term ‘human trafficking’ when working for the United Nations on their 50 for Freedom campaign, and later when working with the Los Angeles-based charity Everychild. I was shocked to discover just how prevalent and close to home this issue is in our current society. According to UNICEF, in 2021 over 160 million children around the world are in some kind of forced labor, up from 40 million in 2017. Children between the ages of five to 11 now account for just over half of the total global figure. This means 1 in 10 children worldwide are trafficked.

The United States is not immune from this tragedy. In Texas, for example, there were over 300,000 human trafficking cases in 2016, with 80,000 of those being minors. When taken into account with the numbers from UNICEF, it is difficult to fathom how trafficking has increased. I’m glad Texas had the courage to publish these statistics. My home state of California does not make its numbers public.

My background as a conductor informs my creative process, which is centered around the perception of how time unfolds. I'm particularly drawn to the concept of the Fibonacci sequence and the Golden Ratio - building the overarching musical structure on the scaffold of time rather than on the number of notes or measures, which parallels to our heroine's experience, measuring her existence in weeks and years.

The music in the first part of the piece is low and foreboding, shadowing the desperation of our heroine's journey. As the music inches toward the climactic point at the Golden Ratio, a ray of hope bursts through and propels us towards a brilliant conclusion when our heroine breaks free from the chains that have been constricting her since childhood.

In many ways, humans have an intense vulnerability, and that vulnerability is available for exploitation, especially in the young. When we think of ourselves as Americans, living in an informed, advanced, culturally enlightened society where there is hope for equality, to know that this type of unspeakable cruelty can persist is mind-boggling. The idea that people can partake, and be subjected to, practices of slavery can only be described as barbaric. It is my most sincere hope, and the hope of ROCO, that Man Nor Money will shed the tiniest bit of light on the hidden epidemic of human trafficking in the US. It is the ultimate injustice.

Commissioned by the League of American Orchestras with the generous support of the Virginia B. Toulmin Foundation, world premiere by ROCO