The Black Swan for Flute and Piano 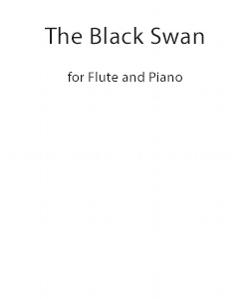 I have always been fascinated with the sounds of birds, as they are beautiful and melodic, harsh and noisy all at the same time.  While researching this piece, I came across The Cornell Lab of Ornithology and its recording of 250 North American Birds In Song.   This fascinating collection of North American birds, their behaviors and vocalizations provided the perfect backdrop for this work.  Throughout this piece, I used birdcalls from water birds, forest birds and woodland birds.  I notated the calls from roughly 15 different birds, then wove them together motivically, melodically and rhythmically to produce the majority of musical material from which to draw upon.

My intent with The Black Swan was to mimic what someone might hear while hiking through any wilderness area in the United States.  The piano takes the role of hiker, while the flute takes the role of the various birds heard throughout the hike.  The piece begins with a short introduction by the piano and is quickly followed by a rather long cadenza by the flute, which introduces all of the bird songs that makes up the most of the musical material used in the piece.  At C, flute and piano come together in a haunting melodic section, which is interrupted at G by different birds whose songs are more agitated.  This time, the piano takes on an accompanymental role.  This A B C design (Cadenza, Moderato, Piu mosso) is repeated, with the last Piu mosso at S depicting the birds becoming more and more agitated until the piece climaxes at the very end in a wild flourish of birdcalls.