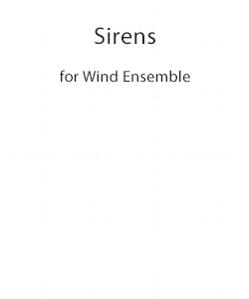 As a composer I have always been concerned with form and proportion—that is, with the harmonious relation of the parts of a work to each other, and to the whole.  My goal for Sirens was to attempt to combine two forms: the tone poem and the ratio of the Golden Mean.

The tone poem is a piece of orchestral music in which some extramusical program provides a narrative element; and what better narrative to musically illustrate than the Greek myths of my heritage.  Throughout Sirens, I have attempted to capture the moments of lust, fear, anxiety, revenge and triumph that run throughout the story in an attempt to create a new kind of tone poem.

Each element of the story is divided into sections according to the Fibonacci numeric series—the mathematical sequence that reflects exponential growth in nature—thus, the overall form of the work is created. The Fibonacci series (1, 1, 2, 3, 5, 8, 13, 21, etc.) forms the ratio of the Golden Mean, which in turn is based on the ratio of phi (1:1.61803).   The musical application of such equation displaces the climax of the piece from occurring in the middle or at the end, for example, to roughly the phi point (.61).

Manifested at the climax (which I interpret as pianissimo), the proportion of the Golden Mean functions as the primary dividing agent in the composition.  The resulting sections in the first part are likewise partitioned.  However, instead of creating mathematical partitions in part 2, a new set of partitions that are based upon the original musical material is created in an unexpected way.

This second part of the piece constricts the sections from part 1 that were derived by the Golden Mean ratio.  So, as the idyllic pastoral opening phrase for piccolo returns, the music begins to feel as if it is being pushed through a constantly narrowing opening. The thematic material from part 1 seems to be getting slower while the music that surrounds it becomes increasingly faster.  As the ending quickly approaches in a manic frenzy, the music suddenly stops and the only thing we are left with are the sounds of the Sirens descending into Hades.

Listeners may doubt the relevance of a seemingly arbitrary mathematical structure to a piece of music, but despite the differing lengths of the sections, the unmistakable balance and symmetry can be a powerful means to musical expression.