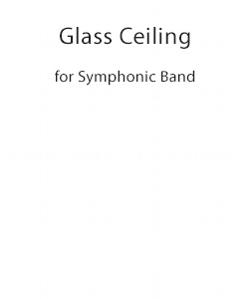 The last time the notion of gender equality was on the minds of the American public was in the early 1990’s. Since then, most people believe the problem has been solved. This simply is not the case. Although women make up more than half of the students in leading MBA programs and law schools, the ratio of men to women at the very top level of corporate America is 20 to 1. On average, women make only 73 cents for every dollar earned by a man, a figure that has declined from 86 cents in 1995. The glass ceiling, as it has been aptly named, is not simply a barrier for an individual based on the person's inability to handle a higher-level job. Rather, the glass ceiling applies to women as a group who are kept from advancing simply because they are women.

In this piece, I attempt to portray a day in the life of a working woman.  Glass Ceiling is a through-composed composition that contains and introduction and numerous distinct sections integrated by various thematic and orchestrational devices.  The main theme is first stated by the brass and is developed throughout the work.  Five triangles, antique cymbals and glockenspiel represent the glass ceiling. Finally, sustained chords that begin piano then crescendo to fortissimo represent the woman’s ambition, struggle and subsequent success.