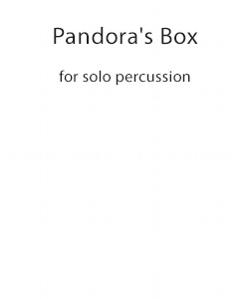 In Greek mythology, Pandora was the first woman on earth. Zeus ordered Hephaestus, the god of craftsmanship, to create using water and earth, and endowed her with many talents; Aphrodite gave her beauty, Apollo music, Hermes persuasion, and so forth. Hence her name: Pandora, "all-gifted".

When Prometheus stole fire from heaven, Zeus took vengeance by presenting Pandora to Epimetheus, Prometheus' brother. Zeus gave Pandora a beautiful box as a gift upon her marriage, which she was not to open under any circumstance. The box, however, began to sing to Pandora begging her to open it.  Impelled by her husband, Pandora opened the box, and all evil contained escaped and spread over the earth. She hastened to close the lid, but the whole contents of the jar had escaped, except for one thing which lay at the bottom: Hope.

Pandora’s Box depicts the story of Pandora and her unfortunate decision to open the gift from Zeus.  This piece is in two movements.  The first movement contains a haunting melody accompanied by a slow rhythmic drone.  This drone is actually a palindrome (group of rhythms that reads the same forward and backwards) that is repeated several times throughout the movement.  There are heavy accented interruptions that are interspersed throughout the movement that represent the evil inside the box.  These accents grow more frequent and act as transition to the second movement.  The driving accented eighth note rhythm is the same rhythmic palindrome from the first movement.  The “evils” are depicted as accents on top of the palindrome and occur as interruptions like before. The second part of the movement turns the interruptions into recognizable ‘beats’.  The last part of the movement is the first part backwards… including the palindrome.