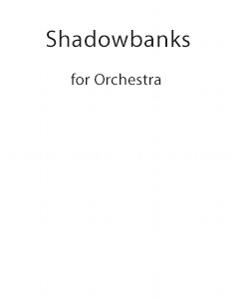 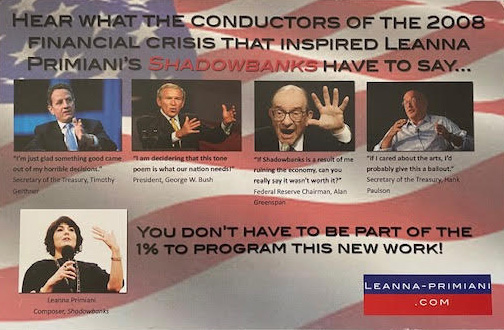 Shadowbanks is a three-movement tone poem inspired by the events that led up to and triggered the financial crisis of 2007-2009. The overarching form of the piece, the durations of each movement, and subsequent sections of each movement were created according to the Fibonacci Series and the Golden Mean. Each movement describes the three major events of the financial crisis: BOOM, BUBBLE, and COLLAPSE. Each movement musically depicts the causes and consequences of the financial crisis. The causes depicted in the work are: the rise of the shadowbanks, easy access to credit, deregulation, speculation, incorrect pricing of risk, predatory lending, credit default swaps, credit default obligations, subprime loans, speculation, debt and mortgage backed securities. In addition to the causes, the names of the major players in the crisis have been incorporated, including Alan Greenspan, Lehman Brothers, Bear Stearns, Merrill Lynch, AIG, HUD, Bank of America, Fanny Mae and Freddie Mac, the SEC, the FED, and Congress. All of the above listed elements were created through an extensive use of motivic and melodic materials developed by use of a musical alphabet created especially for this work. In addition, the rhythmic motives that appear throughout the piece were derived by Morse code telegraphy.