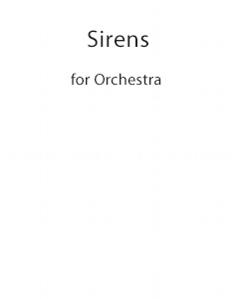 In Greek mythology, The Sirens were sisters who were half female and half bird. They lived on an island in the middle of the ocean, and would sing to sailors to lure them to their island to eat them. Once a sailor heard their song, he would be under their spell. He would attempt to get as close to them as possible, steering his ship into the rocks and wrecking it. It was predicted that The Sirens would die when a ship passed them unharmed. On his way home from the Trojan War, Odysseus and his men were to pass this horrible place. Before they set sail, Odysseus had been warned to make sure the ears of his crew were blocked with wax. Odysseus wanted to hear The Sirens' song for himself, so he instructed his crew to tie him up and refuse to untie him until they were out of range. Odysseus spent that part of the journey tied to the main mast, enabling him to hear the beautiful song for himself. When he heard their song, he begged his men to release him, but they bound him tighter until they had sailed past their island. Once Odysseus succeeded in escaping them, the prediction came true: The Sirens flung themselves into the depths of the sea and descended into Hades.