Three Rap Songs in the German Style
A Parody 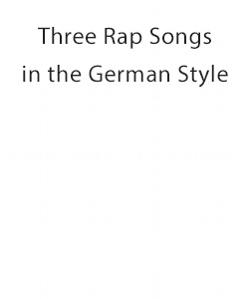 It has been said that rap is the poetry of our time.  Really?  Has society gone from singing the praises of unrequited love to speaking the praises of pimps and prostitutes?  I wanted to put this theory to the test by setting various rap songs in a very “traditional” manner.  Three Songs in the German Style takes the musical styles of Schubert, Schoenberg and Wolf and uses them as accompaniment to a few of the most popular rap songs of the last few years.  The lyrics themselves have not been changed, and the “hook” of each song has been kept in tact and is used at the end of each song.