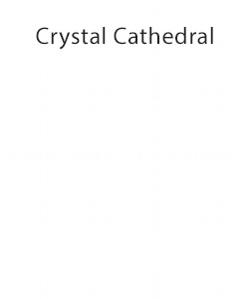 Leanna Primiani has always been drawn to the music of Olivier Messiaen, and used Messiaen’s timeless work Quartet For the End of Time as inspiration for her own piece Crystal Cathedral.  Like Messiaen, Primiani is highly inspired by nature, loves the clarinet, and has strong religious roots. While both pieces are programmatic, both come from completely different perspectives—Messiaen’s approach is spiritual and liturgical, and Primiani’s is more literal in its imagery and programmatic storyline. The last five measures of the piece contain three multiphonic chords and ends on a pure tone, via one’s own journey through earthly struggle and temporal haziness, and one’s arrival at the destination of the pure light of heaven.

Primiani’s Greek Orthodox faith and heritage are evident throughout the work. The asymmetrical 7/8 and 5/8 rhythmic Greek dance patterns [rehearsal I-J] are similar to Messiaen’s use of irregular rhythms, which were inspired by Indian music. The unison rhythmic sixteenth notes used at rehearsal J mimic the unison rhythms in Messiaen’s “Dance of Frenzy,” Mvt VI of the Quartet For The End of Time. Additionally, Primiani uses a harmonic language similar to Messiaen’s, albeit heard through her own harmonic filter.

Just as time plays a fundamental role in Messiaen’s Quartet for the End of Time, time is also a key factor in Crystal Cathedral. Primiani composed the separate sections in terms of time, using “the Golden Mean” as a guide. This creative compositional technique adds a deeper level to the work’s overall imagery, invoking Primiani’s Greek heritage with a sense of spirituality and mysticism.